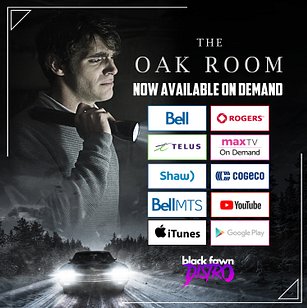 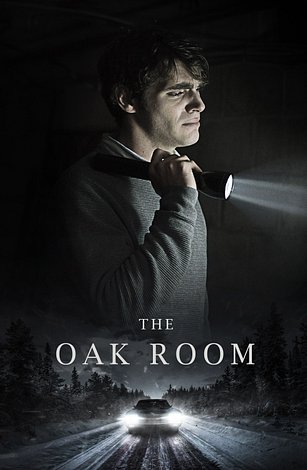 During a raging snowstorm, a drifter returns home to the blue-collar bar located in the remote town where he was born. When he offers to settle an old debt with a girzzled bartender by telling him a stroy, the night's events quickly spin into a dark tale of mistaken identiities, double-crosses and shocking violence.

"For those interested in something far more introspective that plays like an unsettling tale told around a campfire, The Oak Room is an engaging narrative exercise.”
– Meagan Navarro, Bloody-Disgusting

“As the tales gather weight like snow on a roof, and intriguing correspondences accumulate, the impressive structuring tells.... This sharply crafted piece talks the talk and finally threatens to walk the walk.”
– Phil Hoad, The Guardian

"The original script by Peter Genoway is a trip in its own right."
– Nick Allan, RogerEbert.com

“It looks and feels like a modern, frost-bitten noir, but the oppressive intimacy of the bar places the two men in a claustrophobic death grip from the moment Steve shakes the snow off his boots."
– Richard Whittaker, Austin Chronicle

“An absorbing and intricately tangled web of tales that lets the performances speak for themselves, wtih The Oak Room you're not just getting a great night at the movies, but a night at the theatre too.”
– Kat Highes, The Hollywood News

“The end result is sure to be unlike anything else you see this year."
– Luke Rodriguez, Modern Horrors

“The Oak Room is another well-produced feature from Black Fawn Films with a great cast of characters, haunting violence, and a story that will stay with you once it's over."
– Melissa Hannon, Horror Geek Life

“The suspense builds up to a point where the tension from behind the bar to the barstool is palpable. "
– Drew Tinnin, Dread Central